JOHNSON ON THE DOUBLE SEALS WIN

It’s taken Blyth a couple of weeks and games to get acclimatised to the league.  They started off with three straight defeats but have gradually found their feet.  Meanwhile, after a strong start, Birtley have now only won one out of their last six.

Centre stage for Blyth’s win was their No. 10 Adam Johnson. He was the sharpest player on the pitch, showing pace, tactical nous and vision.  Chipping in with two goals sealed the deal.

Blyth could have been a couple of goals to the good within the opening minutes, with No. 9 Evan Howard unable to put the finishing touches to attacks.  In the 13th minute, Johnson showed his intent with a rasping shot that was saved at the near post by Birtley keeper Isaac Robinson.  A minute later the striker got his first, cutting inside a defender and placing it past Robinson.

Given their start to the game, it was a fully deserved lead, with Birtley not at the races.  It took them until the 21st minute before they threatened the goal.  Thibault Charmey got behind the Blyth defence and rounded keeper Callum Corkhill, with Blyth No. 4 Callum Carney clearing the goal-bound shot.

Blyth broke immediately back, with Johnson again turning a defender before putting a shot over the bar.  But Birtley had managed to see out the early Blyth pressure.  They were almost gifted a chance when Blyth No. 2 Joseph Gibson skied a clearance back into his own area, with Birtley No. 9 Joe Barwick beating Corkhill and a defender to the ball, only to see his header go wide of the goal.

For almost half an hour of the second half, both teams were guilty of failing to hit the target with their shots.

Birtley managed to draw level in the 72nd minute.

Awarded a free kick on the edge of the Blyth area, Kaleb Young hit a belter that was well saved by Corkhill, but there was too much power on the shot for him to hold on to the ball.  Substitute Ricky Tanoh was the quickest to react to the loose ball and he scored from a couple of yards out from goal.

But with less than 10 minutes of the 90 left, Johnson scored his second and decisive goal.  Latching on to a long ball, he managed to get goal-side of centre back Daniel Hill before coolly stroking it past Robinson.

Both sides had late chances to score.

In the 87th minute a Barwick shot was saved with his feet by Corkhill and then in the 89th minute, a one-two involving Blyth’s Callum Johnston and Liam Thompson, gave Johston a shooting opportunity, with his effort blocked by a combination of Robinson and Owen Lancaster.

The win meant that Blyth draw level on points with their hosts, with Birtley having played one fewer games. 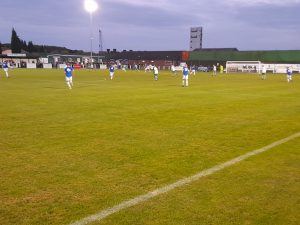 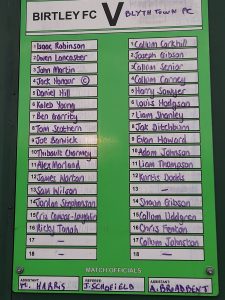 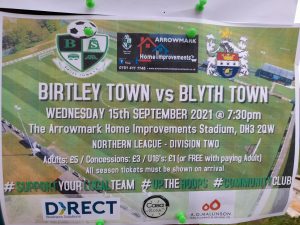