Heaton Stannington sealed promotion to Division One in dramatic fashion after a last gasp winner by captain Ryan Bailey.

The Tynesiders mounted a come-from-behind victory and left it later than late in front of a record crowd of more than 1,000 spectators.

It was Tow Law who were first to strike when they were awarded a penalty in the 15th minute when Joel Pearson drove forward in the area before he was brought down by a mis-timed tackle.

Thomas McAloon stepped up and fired low in the bottom right corner – Dan Regan managed to get a hand to his effort however he couldn’t keep the ball out.

Tow Law had another chance in the 42nd minute to extend their lead – a corner from the right was met by captain Ryan McKinnon however he could only send his header just wide of the post.

The Lawyers had another chance to add another just before half time when Liam Goldsborough’s cross was headed wide by Nick Marley.

Tow Law dominated in what was a scrappy first half and should have been ahead by more, limiting Heaton to only half chances.

But The Stan drew level just before the hour mark when Leighton Hopper’s through ball was met by Dan Stephenson who drove forward before slotting the ball under Tow Law keeper Lewis Graham.

With 15 minutes remaining Tow Law came close to regaining their lead – Aaron Hardy’s cross found Marley in the area, however his goalbound effort was superbly blocked by Laquan Esdaille.  And a minute later Heaton almost took the lead when Michael Hall’s strike from the edge of the area was deflected just wide of the post.

With the game in added on time and heading to extra time and the dreaded penalty shoot-out, Heaton were awarded a corner. David Luke’s kick evaded everyone before Bailey saw his diving header nestle into the back of the net to cue wild celebrations.  The relief for the long-time leaders of the division was palpable.

They’ll be playing first division football next season, along with champions Carlisle City. 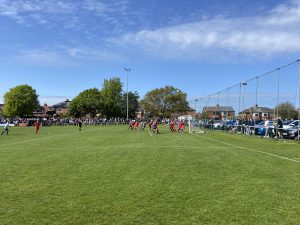 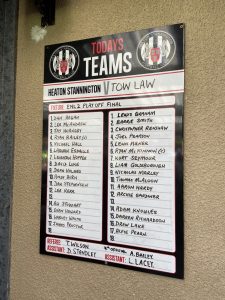