LET THERE BE LIGHT

Horden ended a run of four successive defeats with a comprehensive win over Durham City.  Their aim this season is all about consolidation in Division Two.  Despite their recent form, they look well set to achieve that.

And, apart from a new look programme (the Marras Mag) it was also a bit of a historic night, with this the first game played under the newly-installed floodlights.  They took a bit of time going, but once they did, the result was somewhat predictable and inevitable.

No. 8 Martin Fowler opened the scoring in the 12th minute when he hit a shot from distance.  Durham keeper Niall Frampton got hands to the shot only to see the ball slide into the net.

Their cutting edge was No. 9 Jack Maskell who grabbed himself a first half hat-trick, with goals in the 15th, 23rd and 44th minute.

For the first he met a cross by Kieran Campbell from the left, the second came when the Durham defence stood off, allowing him to get on the end of a header by John Bowes and then just before half-time he rose above the defence to meet a cross from the left.  Frampton denied him a fourth goal in the 22nd minute, tipping a shot over the bar.

The goals kept coming in the second half: An inch perfect pass by Fowler set Neil Fannan up in space on the right.  He had all the time he needed to hit the ball into the bottom left corner of the Durham goal.   Barney Dobinson made it 6-0 in the 62nd minute, finding the net with a low shot from the right.

The seventh came with John Bowes getting a touch on a low, hard cross by Campbell and then David Doughty wrapped up the scoring in the 90th minute.

For Durham, it was a similar pattern to the last time I saw them play – getting off to a good start and then conceding a steady stream of goalsThey could have easily grabbed a couple before Horden scored.

In the opening 10 minutes Alfie Snow had three attempts only to send the ball just wide of the posts on each occasion.  And with 10 minutes to go before half-time he had another chance, cutting inside before hitting a shot over the bar.

Unlike the last time, at least they didn’t throw in the towel and were able to grab a consolation goal when James Hudspeth met a cross with a first time shot to make it  6-1. 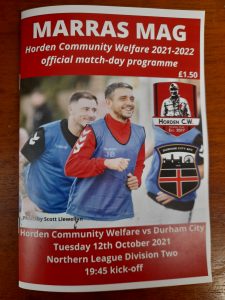