LET THERE BE LIGHT

It’s taken almost exactly a year, but Billingham Town were finally able to play a night match, thanks to their new floodlights system.  It’s been a long, hard slog for the club to raise the money and organise the work, but the new lights shone down on a pretty decent cup game.

Town had too much for their opponents over the 90 minutes, but the Wearside League team gave a very good account of themselves, despite what the scoreline might suggest.  The only (sic) thing they lacked was a cutting edge.

Both teams settled into a positive, passing rhythm, although it was Town who had the early chances, nudging ahead in the 17th minute when a shot by Joe Taylor was saved by Hartlepool keeper Adam Lewis only for Ashley Lavan to pick up the rebound and place it between the keeper and a couple of defenders.

Three minutes later, Hartlepool midfielder Sam Cook had a long range shot saved by home keeper Michael Roxburgh, diving at full length to his left.  In the 22nd minute Alex Bruton almost doubled Billingham Town’s lead, getting on the end of a Ashley Lavan pull back, only for the No. 10 to hit the post.

The half hour saw chances and goals come thick and fast.  A weak back pass by Hartlepool defender Ross Kidson allowed Danny Earl to intercept the ball, take a couple of touches and then hammer it in off the underside of the bar, putting Town 2-0 up.  In the 36th minute, the visitors got a foothold in the game, with a Cook free kick hitting the post; team mate Connor Campbell followed it up and buried the ball to make it 2-1.  Within two minutes, Bruton had another shot hit the post, coming within a whisker of re-establishing a two-goal lead.

The second half didn’t quite have the same flow as the first and Hartlepool weren’t able to exert as much pressure on the home side who extended their lead in the 58th minute when Bruton scored, having twice hit the post.  Breaking on the counter attack, the No. 10 played a neat, quick one-two with Earl before chipping Lewis.  The keeper managed to get a hand to the ball but was unable to keep it out.  Daniel Boyle followed the goal up with three shots in quick succession, all blocked by the Hartlepool defence.

Hartlepool were then able to mount a couple of attacks to keep the Town defenders on their toes, having their best spell around the 65-minute mark, without troubling Roxburgh.

It was Billingham Town who finished the stronger:  substitute Oliver Cann had a shot from distance parried to safety by Lewis and Earl tried to flick the ball round the keeper, only for the ball to go wide of the post.  They wrapped up the scoring in the 90th minute, with Harry Close twisting and turning round a couple of defenders before striking the ball home.

In the end it was a comfortable win, but Hartlepool played their part in an entertaining match. 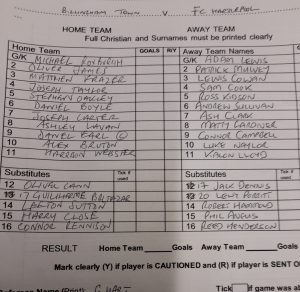