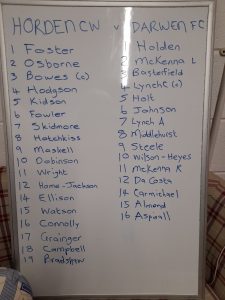 Sixty seconds can be a long time in football and a minute was all it took for this cup tie to pivot, allowing Horden to claim a famous Vase victory.

With 54 minutes on the clock Darwen won a corner.  Left back Gary Basterfield sent it into the box where the ball was met with a thumping header by Luke McKenna to cue premature celebrations by the visitors – the referee had spotted a foul and cancelled out the goal.

Horden responded immediately, taking the free kick, setting them up for an instant counter attack led by No. 9 Jack Maskell who broke down the right before crossing to Liam Wright.  His first shot produced a fine save by Darwen keeper Stefan Holden but the stopper could do nothing to prevent Wright’s follow-up shot finding the back of the net to put Horden a goal to the good.

While the Marras celebrated, Darwen were furious that the referee hadn’t allowed them to re-group.  Their protests – both long and hard – fell on deaf ears.  Not that any more motivation was needed, the circumstances around the goal gave the rest of the game added bite.   It was something of a minor miracle that both teams ended the game with 11 men on the pitch as tetchy confrontations and tackles peppered the rest of the tie.

For all the controversy around the first goal, there were no complaints about the second – executed deftly by sub Josh Home-Jackson.  In the 73rd minute fellow sub Marc Ellison found him with a through ball; he took a touch and for a split second it looked as though he’d nudged it too close to the keeper but he was able to dink it over Holden as he rushed off his line.

It was a second goal that Horden certainly needed, with Darwen posing a constrant threat up front, with Ryan Steele and Rio Wilson-Heyes combining well.  Wilson-Heyes in particular looked their most dangerous player over the tie.

The first half didn’t have the drama of the second.  Darwen started slightly the better but it was Horden who had the first clear cut chance.  Wright hit a shot that Holden did well to stop; the ball came out to Nat Skidmore and his effort was cleared off the line by Darwen centre back Matt Johnson.  Then it was Horden’s turn to clear a shot – by Christopher Lynch – off the line as the No. 4 planted a header on target as he leapt at the far post to meet a corner.

As the half drew to a close, Horden had a scare at the back when Callum Hodgson inadvertently nudged the ball past Craig Foster in the home goal but Hodgson was able to recover quickly enough to clear as the ball trundled towards the goal.

Horden came close to opening the scoring two minutes before the first goal when John Bowes latched on to a ball to the near post only to be denied by Holden and the post.

The game threatened to boil over after the first goal and the referee was kept busy booking players from both sides; but through all the mayhem Horden were able to see the game out and win a place in Monday’s fourth round draw.

Quite some achievement, made all the more remarkable by the fact that they’re our last team in the competition after Whitley Bay fell after a penalty shoot-out.

PS – It’s the first time I’ve been to Welfare Park since the old stand was demolished (see photo below).  The ground has lost a bit of its character but time and progress wait for no man. 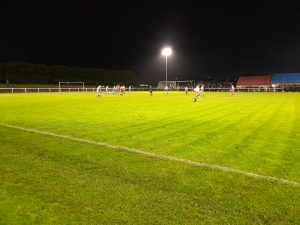 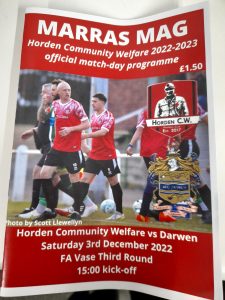 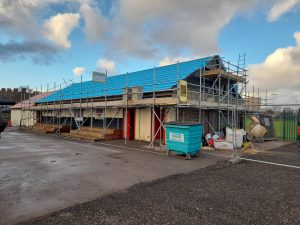