Seven minutes into the match my first note was:  “Messy and disjointed start by both teams.”  Unfortunately, for players, coaches and spectators, things didn’t really improve much for the rest of the game.

It wasn’t for the want of trying, but neither team could rise above the heavy and rutted pitch, with passes falling short and first touches allowing the opposition to nick the ball off the player before the attacker was able to craft anything positive.  The conditions certainly favoured defenders.

Liversedge’s right winger Oliver Fearon was a rare bright spark in the first half with some decent runs and crosses down the right, posing the main threat.

In the second half the visitors – who have played six and won six in the Northern Counties East Premier Division – had two penalty shouts; with the second by far the more confident but referee Sam Paranby didn’t award either.

An hour into the game and I hadn’t made a note of either keeper having to make a proper save, other than Ryhope stopper James Winter who had to have his wits about him to deal with a tricky back pass in the first half.

At least for the last 25 minutes or so the game picked up in pace and a few chances started to be created:  Ryhope’s James Ellis with a couple of shots, one tipped over the bar by Liversedge keeper Jordan Porter and the second hit over the bar.

With 15 minutes to go Liversedge No. 9 Joe Walton came within a whisker of snatching the winner, with an effort that crashed off the top of the bar.

Within a minute of the referee ending the game and signalling penalties there was an ugly confrontation between the two teams that led to two yellow cars and Liversedge’s Jack Hardacre sent off.

In the penalty shoot out Winter gave his team the upper hand with two diving saves for the first two spot kicks.  Bradley Hird and Ellis converted their penalties but Ryhope then missed three out of their next four, with Liversedge converting their next four to progress to the fourth round.

A disappointing end to a disappointing match. (But at least the two sides shook hands at the end of the shoot-out rather than continue the confrontation.) 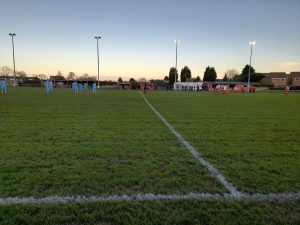 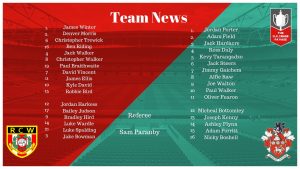