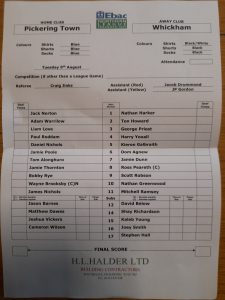 It’s been a tough baptism in the league for Pickering Town.  This was their fourth defeat of the season after being relegated from the Northern Premier League. But the scoreline doesn’t tell anything like the story of the match.

Admittedly they got off to a shaky start.  Right back Adam Warrilow hit a weak back pass that allowed Whickham striker Scott Robson in.  Pikes keeper Jack Norton rescued his team mate with a top save of Robson’s shot.  Warrilow didn’t dwell on the mistake.  Two minutes later he made a strong run down the right and hit a shot that only just missed the target.

Apart from that, Pickering gave the ball away cheaply in a robust opening 10 minutes, with tackles flying around.  Whickham started liked they meant business from the off – launching quick attacks and putting the home side’s defence under pressure.  That pressure paid dividends in the 17th minute.  A pass by Jamie Dunn put Robson behind the defence, forcing Pickering No. 4 Paul Roddom to dive in with a blocking tackle, sending the ball out for a corner that led to the first goal:  Nathan Greenwood’s shot ghosted past Robson who looked as though he blocked the sight lines of Norton who couldn’t re-adjust to make the save.

After that Pickering started to grow in confidence and the chances started to come:  a shot by James Nichols taken at the second attempt by Whickham keeper Nathan Harker and then a quality cross by Warrilow that was met with a header by Nichols that hit the underside of the bar, with the officials turning down appeals that the ball had crossed the line.

Whickham had two half chances – Greenwood sending a shot wide, with the defence backing off as he made a 30-yard run and then Harry Yoxall trying to catch Norton off his line with a free kick that the midfielder took close to the halfway line.

Pickering finished the half well but were dealt a blow seconds before the break.  Norton was sin binned after protesting that he was fouled as he spilled the ball out for a corner.  No. 6 Jamie Poole donned the keeper’s jersey and for the opening 10 minutes of the second half Pickering’s task was to survive without their keeper and to protect his stand-in.  It was mission accomplished….but only just.

Roddam made a crucial goal line block to stop a certain goal after Robson who was able to get past Poole and tried to roll the ball in.  And then, in the final seconds of the 10-minute sin bin, a Dunn cross was met with a powerful header by Robson that bounced off the top of the bar.

Back to 11 men, the home team started to press forward.  A long ball up to No. 9 Bobby Rye was a smidge too strong and Harker was able to get to it first and then Warrilow was within inches of connected with a perfect low cross by left back Liam Love as he made a far post run.  But it wasn’t all one-way traffic:  Greenwood made a run, finished off with a shot that Norton palmed away at full stretch.

A measure of good luck and bad fortune set up the second and final goal.  Pikes defender Daniel Nichols tried to hit a long pass, it rebounded off Whickham sub Joey Smith and fell kindly to Robson who rounded Norton before sliding the ball into the net.  Pickering had one last chance in the 92nd minute when Harker had to make a save at full stretch after a turn and shot by Tom Alonghuro.

It was a full-blooded, high energy game from start to finish. I thought Pickering deserved something out of it.  Since taking over, Tony Fawcett has made the Tynesiders a tough team to beat.  They’ll be delighted with four straight wins to start the season – three in the league and one in the FA Cup – to finish the night as joint leaders.

PS – the slope on the cricket pitch side of the field will take a bit of getting used to for visiting players.

PPS – Norton’s sin bin was the first witnessed at the ground.  They’re a sanction not available to referees at the level that the Pikes played at last season. 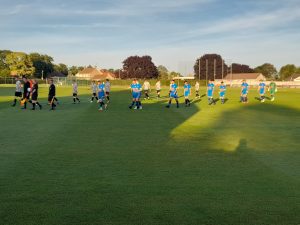 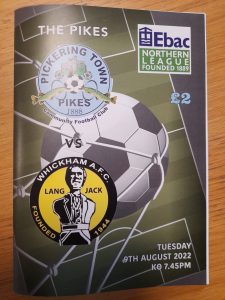