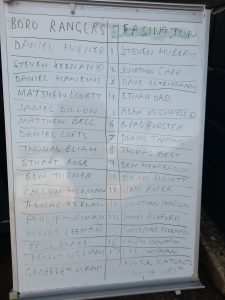 There are all kinds of films that spring to mind after this match:  Die Hard, Braveheart, The Fans Who Came In From The Cold.  (OK, I cheated on the last one.)

But it was a game for the die hard fans who had to have a brave heart to see it through.  In a bitingly cold wind, there were big chunks of this game with not much to write home about.

It was certainly not a Hollywood blockbuster.

It was a match littered with fouls and stoppages that certainly hindered any chance of flowing, fluent football.  At times it teetered on the edge of someone being given their marching orders.

There were sparse pickings in the first half. Five minutes in, Boro Rangers’ No. 9 Stuart Rose tried to guide the ball past Colliers keeper Steven Hubery who spread himself and kept the ball out with his foot.  Both teams defended their 18-yard lines solidly.  Boro Rangers tried to attack quickly  on the ground while Easington knocked several long balls high and long to try and get the front players involved.

The second half had a bit more to offer.  In the opening 10 minutes both teams won free kicks just outside the penalty areas but both were sent well over defensive walls and bars.  Rose then found Daniel Lofts with a through ball but Hubery raced out to kick it clear.  Rangers’ Thomas Bligh had a long range shot come back off the post only for the assistant to flag a team mate offside.

Full back Jonny Carr had the visitors’ best chance – hitting a  shot just wide of the bottom corner.  But the two best chances of the game fell to Boro Rangers as they took the game to Easington in the closing 15 minutes.

Ben Turner chipped the ball in to the danger area but Rose placed a diving header wide and then it was Turner’s turn – hitting a shot as he fell backwards, forcing a diving save by Hubery (and one of the few saves of the match).  And that was it.

Boro Rangers hadn’t had a league match since the beginning of December and Easington came into the game on the back of a heavy defeat to Newcastle University, so perhaps it was no surprise that it was a game that left quite a bit to be desired. 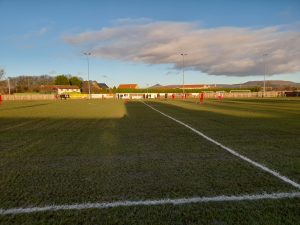 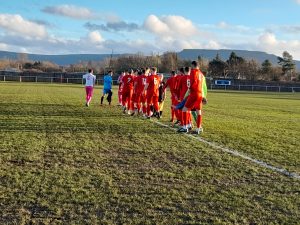