RCA PICK UP CRUCIAL THREE POINTS ON THE ROAD

Sunderland RCA fought back in the second half to come away with all three points from the Voneus Stadium against Bishop Auckland.

The visitors opened the scoring just eight minutes in when Taylor Richardson beat the offside trap to find himself one on one with Nicholas Liversedge – Richardson saw his first effort saved but he slotted home the rebound into an empty net.

Bishop equalised three minutes later when Matthew Waters got onto the end of a cross before brilliantly flicking the ball over the head of RCA keeper Jonathan Ball.

In the 28th minute Bishop took the lead through Damien Stevens who slotted home after getting on the end of George Pinder’s low cross.

The only real chances of the first half resulted in goals – with neither side creating much else for the remainder of the half as Bishop went into half time in the lead.

With both sides not creating many chances, RCA began to gain control in the last 20 minutes of the match.

With 72 minutes on the clock, Richardson drove into the box before cutting his shot back across goal – which agonisingly came back off the post.

In the 78th minute RCA drew level, as Richardson cut inside and took aim from 30 yards, which resulted in his effort nestling in the top corner leaving Liversedge no chance.

Straight from the kick off RCA came close to taking the lead, when Mark Davison cut inside and fired just wide from the edge of the area.

RCA completed their second half comeback in the 83rd minute when Davison drove into the box before slotting home beyond Liversedge.

Bishop had a chance to secure a point at the death, however Pinder could only fire inches wide of the post.

Bishop Auckland travel to Whickham in their next game, whilst Sunderland RCA travel to Newton Aycliffe. 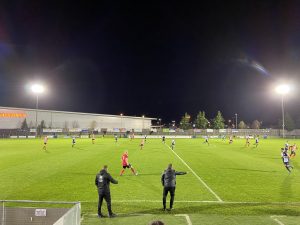 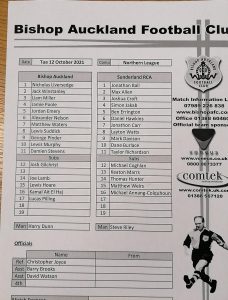