Patience was rewarded at Kingsley Park.

But deep into injury time Redcar Town found a late winner, with sub Sam Webster grabbing his chance, putting a shot high over Ryton keeper Daniel Gladstone  The No. 12 was then mobbed by team mates who knew it was too late for Ryton to find an equaliser.

It was a very different start to the game.

Ryton took an early lead.  In the 4th minute they broke down the right, with the ball finding Dillon Blake whose crisp shot put the hosts 1-0 up.  They followed that up with four more attacks without reply.  A Scott Bamborough free kick that skipper Callum Turnbull tried to bundle in; an Andrew Brown cross was scooped over by Blake; and then a Unpha Koroma effort taken low down to his left by Town keeper Michael Aglie.  Brown followed that up with a header put over the bar.

Ryton looked dangerous with every attack.

Meanwhile, for 20 minutes, Redcar had plenty of possession without overly troubling the home defence.  They almost fell further behind in the 34th minute.  Michael Laws put a header from a free kick back across the box, with Daniel Kent hitting a shot off the bar.

The visitors came closest to scoring in the half with nine minutes to go when Gladstone pulled off an excellent double save – stopping a Carl Williams shot and then a Sam Wheatley follow-up shot at the near post after the keeper scrambled across his line.

Nine minutes into the second half, the pass of the match set up their equaliser.  Redcar captain Joe Bennett sent a terrific long, crossfield ball from right to left, finding Williams who had time and space to score.  Two minutes later, Ryton had Gladstone to thank again for keeping it level when Williams got behind the Ryton backline, with the keeper smothering the No. 9’s effort.

For much of the rest of the match, Redcar played the neater football and it was their turn to look dangerous with their attacks, but No. 4 John Leyshon almost gifted Ryton a goal with a sloppy back pass that was intercepted by Kent, only for No. 5 James Smuk to dispossess the Ryton attacker before he could shoot.

At the other end of the pitch, Redcar No. 3 Scott Howes cut back across a defender, with his shot punched away by Gladstone.

In the 62nd minute Ryton missed a glorious chance to re-take the lead.  A quick break by Rhys McLeod took him past a couple of Redcar defenders before passing the ball out to Kent.  His cross was laid on a plate for Scott Jasper only for the substitute to sky the ball over the bar with the goal gaping.  It was a head-in-the-hands miss.  And with just over five minutes of the 90 to go, Louis Anderson pulled a shot across the Redcar goal.

The Ryton defence repelled the attacks….until that Webster winner in the 93rd minute. 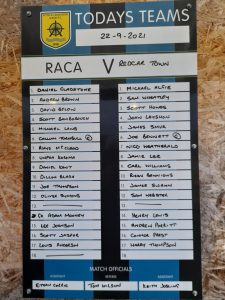 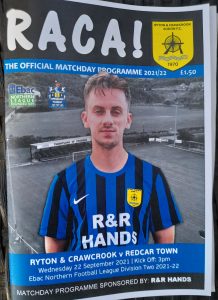