Sometimes good teams can play with style and elan and sometimes they have to battle hard for wins.  It looks as though Heaton Stan have all those qualities.

Last month I saw them tough out a win at Esh Winning in a physical contest.  Yesterday the runaway leaders of the second division showed their more stylish football, brushing Brandon away with an imperious display.

They were good for their nine goals (and if truth be told, they could have had a couple more had it not been for some good saves by Brandon keeper Reuben Bull.

From slick passing, intelligent off-ball runs and a side that plays like a well-organised team, they’re going to be hard pressed not to get promotion at this rate and it’s easy to see why big crowds are flocking to see them.

They were 2-0 up in eight minutes and never looked back.

Mackenzie Sharpe danced round a couple of Brandon defenders before placing the ball into the bottom right hand corner of the goal.  That was quickly followed by Liam McBryde meeting a cross by Sharpe and finding a big gap after Bull’s momentum took him the wrong way, with defenders standing off the No. 9.

More loose defending almost let Dean Holmes in.  He tried to bend the ball round Bull who managed to push it away diving to his right.  From then on in, it was a case of manning the barricades for the visitors.  McBryde came close to getting his head to a Lee McAndrew cross; then Bull, at full stretch, pushed away a Dan Stephenson shot before Kevin Carr sent an effort over the bar.

At the half-hour mark Brandon were starting to get a foothold in the game only to concede a third.  Bull pulled off another good save of a McBryde shot only for the loose ball to fall to Holmes who had the simple task of prodding it in.  They made it 4-0 in the 39th minute after a couple of 1-2s between Holmes and McBryde, with Holmes providing the finishing touch to take them into the half-time break.

They immediately picked up where they left off.  In the 48th minute Holmes and McBryde combined again.  It looked as though the No. 9’s first touch had squandered the chance but he managed to get control of the ball at the second attempt before dummying a couple of defenders to prod it in.

The sixth and seventh goals came in quick succession:  Holmes placing the ball just inside the right hand post and they Carr sending a shot over Bull and into the net.  Sandwiched in between the goals was an Andy Burn shot from outside the area that bounced off the top of the bar.

With under 15 minute to go, sub Connor Campbell was given time and space to meet a Holmes cross, placing his header into the top right of the Brandon goal.  The game and scoring was wrapped up in the 90th minute with a deft pass by another sub – James Proctor – found McBryde to his right.  The No. 9’s shot back across Bull found the inside of the left hand post, sealing an impressive performance.

There weren’t too many positives for Brandon – most teams in the division would have lost to Heaton Stan in this form.  Aside from several saves by Bull, they bagged their goal in the 54th minute.

A free kick was headed on by No. 9 James Connor, finding Niall Fingleton whose first time shot found the gap between Heaton Stan keeper Dan Regan and the post.  To their credit, they still tried to press forward well into the second half, even though they’d already conceded half a dozen goals.  Apart from the goal, the only time they came close to scoring was when Stan defender Laquan Esdaille almost headed the ball into this own net.

It was Heaton Stan’s day, from start to finish. 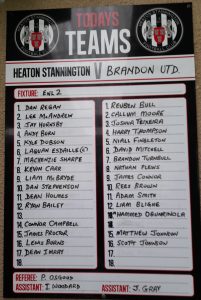 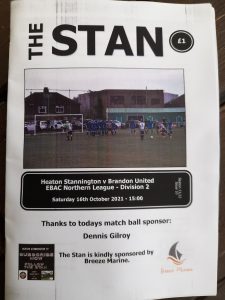