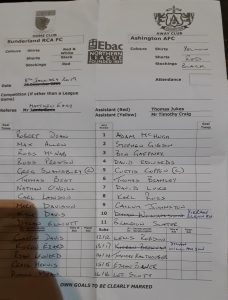 The headline of saints, sinners and kitchen sinks is the easy bit, but trying to follow to twists of turns of this game is something completely different.

In the first half RCA ran out of kitchen sinks to throw at Ashington.  Chances came, chances went in abundance.  On several occasions they were inches away from taking the lead.

The fact that they failed to score was not only down to some close shaves, it was also down to some extremely dogged defending by the Colliers.  They were constantly pushed back but kept their nerve and organisation (with left back Ben Gaffney particularly tenacious) along with some good saves by keeper Adam McHugh.

Mark Davison and Kyle Davis both had chances aplenty but couldn’t find the net.  Inevitably, it was the Colliers who took the lead when a quick break set Kieran Brennan up against the RCA defence.  The No. 10 looked as though he’d taken too many touches but managed to cut the ball back and then place it past RCA keeper Robert Dean.  ‘Against the run of play’ doesn’t begin to do it justice.  (There was even a twist in the tale for Brennan.  Originally down as a substitute, he was drafted into the starting line-up when team mate Dylan Williamson was caught up in traffic following an accident.)

It was the visitors’ best attack in the first half by some way.

However, within minutes of the second half starting, Ashington’s defence were saints turned to sinners.  They just fell apart, allowing RCA to enjoy a 17-minute, five goal blitz.

Goal 1 (47th minute):  The ball is drilled into the six-yard box, McHugh fails to hold on to it and Carl Lawson knocks it in.

Goal 2 (49th minute):  Dylan Elliott gets a glancing header to a cross by Davison and finds the back of the net.

Goal 3  (52nd minute):  The pick of the bunch:  Davison plants a beautifully hit free kick over the wall and into the top left corner of the goal, leaving McHugh stranded.

Goal 4:  (59th minute):  A long ball by captain Greg Swansbury gets through the back four, McHugh hesitates and allows Nathan O’Neill to get to the ball first and nudge it in.

Goal 5:  (62nd minute):  A ball into the box gets past defenders and keeper, with Davison on hand to prod it home for his second of the night.

With 15 minutes to go, Swansbury was sent off for a challenge on Lewis Robson, however it meant that Ashington were down to 10 men too as they’d used all of their substitutes, with Robson unable to continue.

It was obviously way too late, but Ashington managed to re-group and prevent further scoring in the final quarter of the game.  It was an astonishing turn-round. 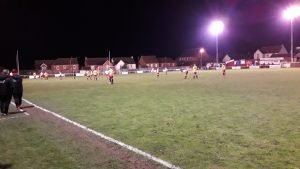 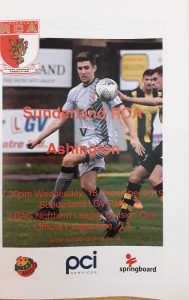