SHIELDS AT A CANTER

The Robins are through to the semi-finals of the Techflow Northumberland Senior Cup at a canter.

The scoreline was perhaps a little harsh on Heaton Stannington – who at times played some neat, passing football – but pace, strength, movement and clinical finishing by the first division team was more than enough to see them progress.

The tone was set as early as the second minute when a shot by Robins No. 8 David Robinson forced a diving save by Stan keeper Daniel Regan.  The visitors were pegged back in their own half and it was no surprise when Shields took the lead in the 19th minute – Heaton Stan defender Jay Hornsby judged to have fouled Shields winger Jamie Norvell in the box, with Dan Wilson tucking the penalty away.

Wilson doubled his tally two minutes later after Callum Smith intercepted a loose Stan pass before sending the ball on to Wilson whose shot nestled in the net after pulling the ball back across the goal.

After the second goal Heaton started to show a bit of confidence and some more attacking intent, with Leighton Hopper their most dangerous threat going forward.  Shields continued to create but not convert chances, while the visitors’ best shot was a swerving effort from outside the box by Andrew Burn.

The game was put to bed in the last five minutes of the half:  Chris McDonald getting a touch to a low, hard cross into the heart of the area by Andrew Cartwright and then a quick, long ball from the back found Callum Smith who deftly lobbed Heaton Stan keeper Daniel Regan from distance.

With the game won, the second half was a few gears short of a match played at full tilt.

Heaton Stannington made early inroads into the Shields lead when the defence failed to clear the ball which fell to Daniel Stephenson who stroked it past keeper Greg Purvis.  Given a bit more time and space, Heaton had their best spell of possession in the opening 15 minutes of the half.

But they couldn’t build on the goal and Shields still had a couple of goals in them.  Smith held the ball up on the edge of the Heaton area to allow Wilson to run past him, with the No.9 taking a pass and then chipped it over Regan.  Their sixth came in the 77th minute from a corner which was headed into the six yard area by Gary Ormston, allowing Smith to knock it (with what looked like a deflection off a defender).

With five minutes to go Hopper bagged a goal that his play deserved, hitting a strong shot at the end of a driving run into the Shields box.  In the closing seconds Shields sub Brad Hird almost scored but that would have been rubbing salt in the Heaton Stannington wounds.

(Quote of the match:  a North Shields fan, standing at least 70 yards away and on the other side of the pitch, shouted at the officials:  “How can he be offside?”  Who’d be an official?:) 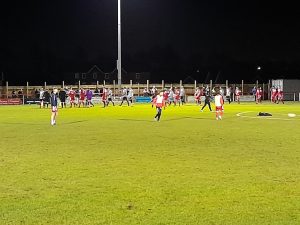