SHILDON A CUT ABOVE

Shildon – once of the Northern League parish – have moved on to pastures new, with promotion out of our league.  And they have clearly stepped up to the challenge of the new league.

They produced a crisp, professional display to dispatch Consett.  But there were mitigating circumstances for the Steelmen:  a whole raft of injuries meant they had to change more than half their team from Saturday’s Vase defeat.

But they’re now out of two cups within a matter of days.  They started brightly enough.  Calvin Smith getting on the end of a Darren Holden cross but hitting it wide and Stephen Callen trying to lob Shildon keeper Matthew Bateman who was able to grab the ball at full stretch.

But then Shildon started to impose themselves on the match – Michael Sweet with a header over the bar and then the No. 9 working hard to keep the ball in play before sending over a cross met by Danny Craggs whose effort brought an excellent save out of Consett keeper Ross Coombe.

He could do little to stop Shildon’s first goal – Kurt Matthews with a cross, setting up Billy Greulich-Smith with a powerful header to make it 1-0.  Aidan Heywood doubled their lead with a shot from outside the box that made it past a despairing dive by Coombe.  In between, the Consett keeper pulled off another fine save to deny Chay Liddle who hit a shot from distance.

Consett finished the half with a couple of attacks but failed to test Bateman.

They struggled to make much headway in the second half, battling Shildon and a stiff breeze.  A half chance came five minutes into the half when captain Jake Orrell sent over a free kick from wide left.  Ross Wilkinson rose above the defence, managing to get the slightest of touches to the ball which sailed just the wrong side of the post.

The tie was put beyond Consett in the 57th minute:  Nick Allen tripping Heywood in the box, with Sweet scoring from the penalty spot, hitting it low and hard to the left.

With the injuries piling up, Consett’s squad will be tested to the limit in the coming weeks. 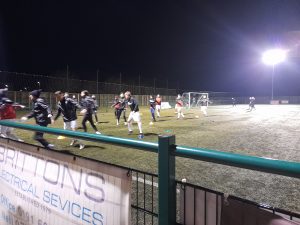 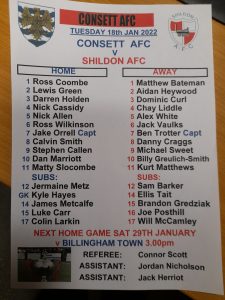 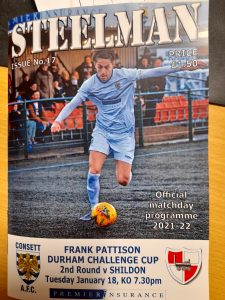