SO CLOSE, AND YET SO FAR

Cup ties can be games of fine margins.  And fine margins put paid to Red Star’s Vase campaign.  Among the fine margins was Ferriby goalkeeper Jordan Douglas who kept his team within striking distance.

As early as the 4th minute he made a crucial save.  Ferriby conceded a foul on the edge of their own box, right in the middle of the D.  Sean McRoberts hit a terrific free kick and that was matched by an equally fine save by Douglas diving down to his left.

It was to herald a first half of the teams trading attacks and counter attacks, with plenty of pace on show.  Red Star got their noses in front in the 19th minute when a Ferriby defender was judged to have climbed over the back of Luke Sullivan, conceding a hotly-disputed penalty which the No. 10 converted.

They doubled their lead on the half-hour mark after another initial quality save by Douglas.  Red Star captain Thomas Bott hit a long range shot that dipped just in front of the keeper who, for the second time, managed to push it clear for a corner diving down to his left.  It was a short-lived reprieve, with Andrew Johnson chesting the ball into the net after the ball was put into the heart of the Ferriby goalmouth from the corner.

Red Star keeper Andrew Jennison was being kept busy at the other end too.  In the 33rd minute he pulled off two back-to-back saves:  punching away a shot by Ferriby left back Laurence McKay and then tipping a follow-up shot by Ben Leyland over the bar.

A brisk and dynamic first half was brought to an end with both teams coming close:  Ferriby No. 9 Leigh Hutchinson heading a corner down and wide at the far post and then Paul Gardiner seeing a shot cleared by a Ferriby defender close to his goal line.

In the second half the match took on a completely different complexion, with Ferriby taking the game by the scruff of the neck and deservedly levelling the tie.  This was despite another “fine margin” incident:  Gardiner seemed to slip as he ran towards the Ferriby goal and deflected a Johnson shot away from the target.

In part Ferriby were helped by Seaham’s inability to hold on to the ball, ceding possession and inviting repeated Ferriby attacks, with Johnson ploughing a lone furrow up front.

For 15 minutes the Seaham defence stayed solid but Ferriby made it 1-2 in the 60th minute when a free kick from wide right sailed over everyone with No. 4 Levi Tarbotton sliding in at the far post to bundle it over the line.  It gave the home team the impetus they needed and 11 minutes later they were level.  Daniel Hawkins was judged to have pulled No. 10 Danny East back in the penalty area and referee Neil Howlett awarded the second penalty of the match.  Substitute Danny Buttle hit it low and left past Jennison and the equaliser kept the wind in Ferriby’s sails, aothough they couldn’t convert three late attacks:  a Tom Corner cross flashing across the Seaham goalmouth with Gary Bradshaw only a couple of feet from getting on the end of it; a free kick on the edge of the Red Star box hit straight at the wall and then Seaham substitute Thomas Lawson able to snuff out a quick, threatening break by Buttle.

It was then on to nerve-gangling penalties.  Each team missed one of their opening five kicks but it was David Henderson who saw his team’s 7th spot kick saved by Douglas.  He’d kept his team in it and he was the hero on the night for the hosts. 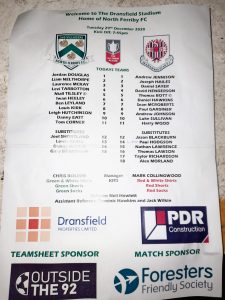 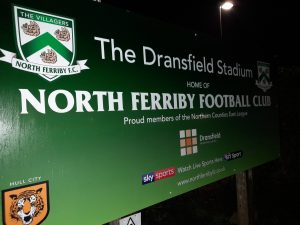 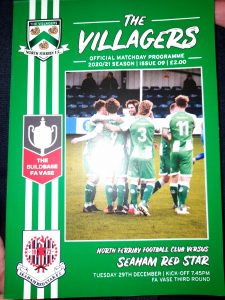 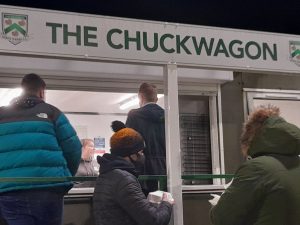 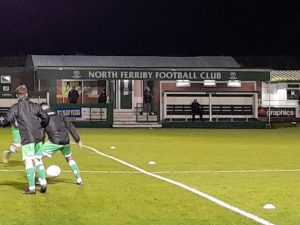