Billingham Synthonia came away from promotion rivals Ryton and Crawcrook Albion with all three points after a brilliant display at Kingsley Park.

It took only five minutes for the home side to take the lead as Scott Bamborough spotted Synners keeper Jaan Yaqub off his line, before chipping him from about 25 yards out.

The away side drew level in the 21st minute – Clark Kay’s cross was met at the back post by John Howard who brilliantly volleyed home beyond Ryton keeper Dan Gladstone.

Just a minute later Synners took the lead through Ben Henderson. Ryton gave up possession in the middle of the park, before Henderson drove forward and fired into the bottom corner from 25 yards to put his side in the ascendancy.

There seemed to be no stopping of the away side as they began to take control of proceedings.

The visitors almost added a third in the 26th minute when Henderson’s close range effort was well saved by Gladstone.

Tensions began to rise between the two sides which saw Kay booked for a rash challenge, however the Ryton dugout believed the left back should have walked.

Minutes later Synners added to their advantage – a quick counterattack saw Howard play Henderson through on goal who lifted the ball over the onrushing Gladstone.

The majority of the second half didn’t bring much action from either side until the 77th minute, as Synners put the game beyond doubt.

A long ball forward was chased down by Henderson, who shrugged off Ryton defender Carl Paterson before slotting home into the bottom corner to seal his hat-trick.

Henderson almost scored his fourth of the game with a brilliant curling effort – only to be denied by an equally brilliant save from Gladstone who tipped Henderson’s strike over the bar.

Things went from bad to worse for the home side two minutes from time – Paterson sent his marching orders after picking up a second yellow card.

Synners sealed the win and the three points to send them fifth in Division Two – six points behind second placed Ryton with two games in hand.

Both sides compete in the Second Round of the Durham Challenge Cup in their next fixtures – Ryton and Crawcrook Albion travel to Ryhope CW, whilst Billingham Synthonia host West Auckland Town.

PS – a pall of fog descended on the pitch in the closing minutes.  Tongue in cheek requests by Ryton fans for the game to be abandoned were to no avail. 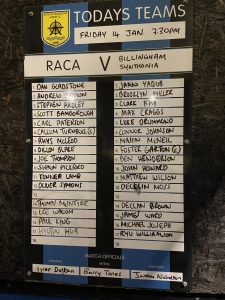 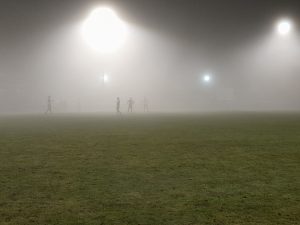 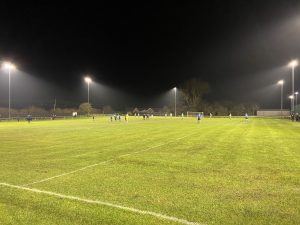