Sometimes you’ve just got to graft your way to a win.  A heavy, lumpy pitch meant that tidy, flowing football was never going to be high on the agenda for this Northumberland Senior Cup quarter-final tie between two of our second division teams.

The Terriers are in the semi-final thanks to a quick reaction and a precise finish.  Seventeen minutes into the match, a ball was pushed up to Bedlington No. 9 Jackson Ward but he couldn’t quite get a shot away.  The ball was only half cleared and it fell to right winger Keelan Nellis who instinctively hit it first time between defenders and keeper and into the net.

Other chances came and went for both teams, but none could find Nellis’ precision.  Before the goal, Bedlington keeper Nathan Harker saved shots by University strikers Jack Butler and Josh Hammett in quick succession, while University keeper Daniel Dekanski was able to deflect a Ward shot out for a corner.

Bedlington played with more energy and pace compared to the last time I saw them against Brandon and they seemed to adapt to the difficult pitch better than University.

Just after half an hour Ward and Nellis played a one-two but Ward placed the ball too close to Dekanski who was able to save it with his legs.  That was quickly followed by an attack by University No. 11 Blake Wood who drove into the Terriers box only for full back Tristan Gray to slide in with a well-timed interception, with Wood picking up the ball again.  His foll0w-up shot came off a defender for a corner.

Terriers thought they’d doubled their lead in the 37th minute when Glenn Harvey broke down the left and sent over a dangerous cross that was met by Ward who tucked it away, only to be judged offside.

University started the second half with quicker, more direct attacks and it almost paid off with their best chance of the game when sub James Coates found Butler who forced a fine save out of Harker.

The half turned into a more scrappy, untidy affair.  University crafted the better openings but couldn’t convert them:  Coates passed to fellow sub Tom Romano, with his shot blocked with his legs by Harker who came racing off his line.

With quarter of an hour to go, University could have had a penalty as Romano was brought down in the box, but play was waved on by referee Matt Sowerby.

A solid Bedlington defence was then able to see out the rest of the tie. 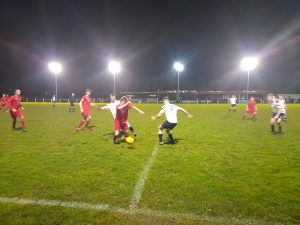 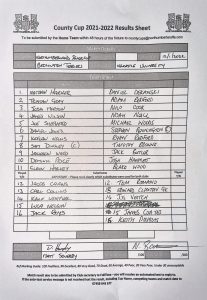