Bedlington Terriers have been one of the surprise packages of the season so far.  Last season was a bit of a struggle, but they’ve found new life with the new season and are now one of the top teams in the division.

And they were worthy winners over league new boys Chester-le-Street United.  Once they got their noses in front, there was no stopping them and, in the end, they ran out pretty comfortable winners.

The first half wasn’t much to write home about – neither team able to impose themselves on the oppostion.  Most of the play was in between the two areas, with a couple of forays into the box by United but they all came to nought.  The only shot of note in the opening 15 minutes was by Terriers No. 4 Callum Carney, stopped by Chester-le-Street defender Thomas Cole.

Both teams looked to get the ball forward as quickly as possible, with not much patient build up play.  United in particular was guilty of over-hitting their long balls up to their front players.

And the visitors had their keeper – Kieran Harwood – to thank for keeping a clean sheet going into the break.  Terriers left back Joe Richardson hit a long, crossfield ball to the far post.  Jacob Cairns’s shot was saved by Harwood with his legs and a follow-up shot by James Wilson forced another save by the keeper.

In the 49th minute Richardson bent a free kick over the United wall and only missed the target by a couple of feet.  Two minutes later and the Terriers were ahead.  A corner reached the far post, was knocked back into the goal mouth where Joe Thompson was quickest to react to knock it in.

The goal gave Bedlington fresh momentum, momentum that they kept for the rest of the game, while United seemed to flag and run out of steam as the half progressed, with their strikers not getting much change out of the Terriers defence.

The United defence was prised open in the 63rd minute.  As they pushed forward, an intercepted pass was knocked up to Jacob Cairns close to the halfway line.  He raced forward until one-on-one with Harwood who managed to get a touch to Cairns’ shot but not enough to keep it out of the net.

The second goal encouraged Terriers to play their best football of the match – some of their approach play was easy on the eye and they were rewarded with their third and final goal in the 78th minute.  A ball from the right byline came to Kristian Sands who absolutely thumped it first time, giving the keeper no chance to stopping it.

The Terriers were good for their win, a win which takes them to fourth. 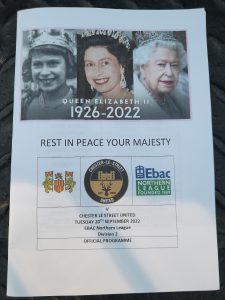 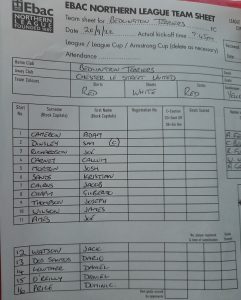 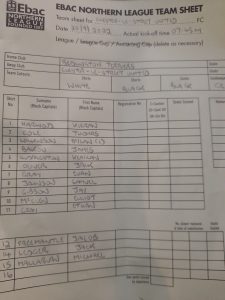 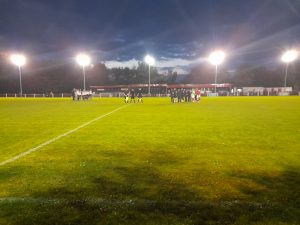