THE ECSTASY (AND THE AGONY)

The Ectasy of winning a penalty shoot-out after one of the toughest, most competitive games I’m sure the Robins have had all season.

They started the game well enough, getting into their stride the quicker of the two sides but their attacks floundered by over hitting their final ball or putting them too close to Harborough keeper Elliott Taylor.  At the back they had to be on their toes to combat the home team’s quick counter attacks.

In the 28th minute Harborough won a free kick 20 yards out, with No. 7 Joshua Walsh hitting a sweet strike past the Robins wall and just out of the reach of Shields keeper Ollie Marshall to put the home side 1-0 up.

They had little time to rest on their laurels with Andrew Cartwright finding Shields No. 9 Dan Wilson in the box.  The front man was able to work some room for himself before firing it past Taylor to make it all square.

Gradually the Robins were able to take the game to the hosts:  Wilson sending over a cross that got past Taylor but the ball was cleared before it reached a Shields attacker.  Then Ryan Carr had a shot deflected for a corner, from which Jack Walker hit a volley over the bar.

Both teams could have found a late, heart-breaking winner.  With six minutes to go, Wilson got the better of Town centre half Ben Williams before hitting a shot past the keeper and just the wrong side of the post.  Three minutes later, Harborough No. 4 Paul Malone hit a powerful header towards the Shields goal, with Marshall able to stop and then grab the ball before a Harborough player could poke it home.

With nothing to separate the teams, it seemed inevitable that the tie would be decided by a penalty shoot-out.  Shields held their nerve, with Wilson, Brad Hird, Carr and Chris McDonald giving the keeper no chance with their spot kicks.

Harborough winger Rhys Hoenes stepped up to take his team’s fourth.  He struck the ball after a stutter step but Marshall guessed right to make the decisive save.  That left it to Gary Ormston to seal the win, and he made no mistake to cue massive celebrations among players, coaching staff and fans.

The Agony for Consett – losing in the 90th minute as they tried to get back to Wembley in consecutive years; going ahead as early as the third minute thanks to a Jake Orrell goal only to be pegged back in the 62nd minute (11 minutes after the Steelmen had Matty Slocombe sent off) and then the hammer blow late on.

The Robins are now our only surviving club left in the Vase as they try to repeat their famous Vase victory seven years ago.

PS – As you would expect, the Robins had a sizeable and vociferous support with them on the day – from greeting the team when they arrived at the ground (see photo below) to wild celebrations involving fans, players and coaches at the end. 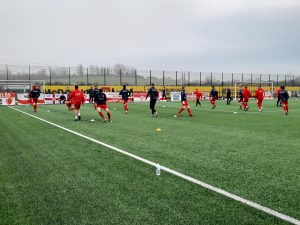 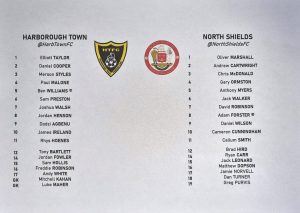 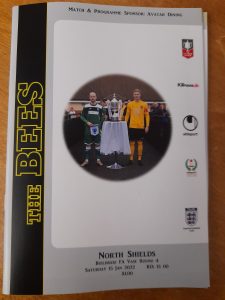 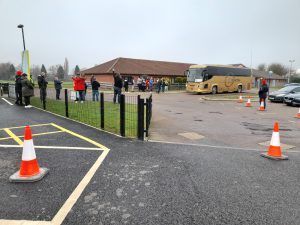