TIMING THE KEY FOR WASHINGTON

They couldn’t have timed it better.  For the first time this season Washington were able to keep a clean sheet and it helped them secure three precious points.

It’s a win that keeps them within touching distance of the teams above them at the bottom of the division.

For Blyth Town it was a frustrating afternoon.  A man to the good, they dominated the second half but couldn’t find the back of the net to get anything from the match.

Washington made the early running in the game, looking more dangerous going forward, with a header by No. 9 Brad Chisholm going wide right and then shots by Broomfield and Lewis Johnson well saved by Blyth keeper Callum Corkhill.

They made the decisive breakthrough in the 14th minute when Kieren Broomfield played a one-two with Tom Olley before finding the gap between keeper and post.

It took Blyth 20 minutes to get into the game but their shots were then either off target or lacked power to trouble Washington keeper Alex Lawrence.

As the half drew to a close Chisholm had a couple of chances: the faintest of touches to a Jak Hanson cross, with Corkhill managing to get a hand to the ball before it crept inside the post.  Chisholm then dispossessed the keeper as he rolled the ball out before curling a shot past the outside of the right hand post.  A cross by full back Johnson was met with a header by Chisholm, but the ball skidded wide left.

And then, with only seconds to go, Chisholm was sent off for raising his hand to the face of a Blyth player.  It meant the team had to try to hang on and protect the slender one goal lead for the rest of the game.

Predictably, the second half was dominated by Blyth, with Washington only able to create a couple of openings.  Blyth No. 10 Ben Gaffney hit a shot from 25 yards out, taken by Lawrence at full stretch down to his left.

Blyth thought they’d grabbed an equaliser after Brandon Slater got goal-side of the Washington defence before passing to Gaffney who slotted the ball into the net, only for the goal to be chalked off for offside.  They were temporarily reduced to 10 men while captain Daniel Ord was sin binned for disputing the decision.

They came closest to scoring in the 72nd minute:  Kurtis Dodds found Slater with a through ball.  The No. 7 took a couple of touches before his shot was stopped with a diving save by Lawrence who was able to push it out for a corner.

They continued to try and find a way past the Washington defence, hitting crosses from left and right and through balls, but they couldn’t craft an all-important equaliser, with their final attacks all faltering with overhit final passes. 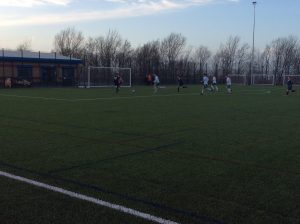 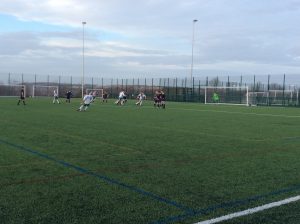 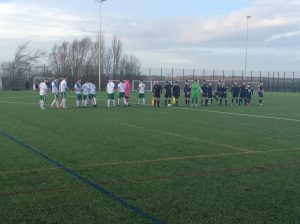 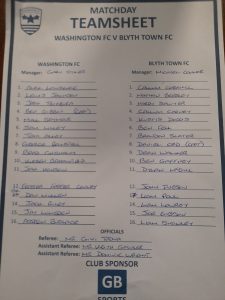