Despite getting off to a flying start, the game never reached the heights that an early goal promised.  For both teams, it was match that didn’t get close to being played at full throttle.

It took only three minutes for Newcastle University to take the lead.  Jack Butler passed the ball out to winger Josh Hammett and his cross was met by No. 9 Tom Romano whose first shot was stopped.  He got a second chance with the rebound off the block and prodded it in.

It was the highlight of the first half that was lacking in quality and chances.

Most of the shots and headers were either put high and wide, or struck straight at the keeper.

One of the few shots on target came in the 14th minute.  Butler ran across the Terriers defence, with his effort punched away by keeper Robert Hodgson.  At the other end of the pitch, the home side overplayed the ball at the back, putting themselves under unnecessary pressure.

Uni keeper Edward Claxton had only one save of note to make in the first half – diving down to his right for a Dominic Price shot.  Terriers’ best move came in the closing seconds of the half – a long, crossfield ball finding Mason Stephenson who cut across a defender before shaping up to shoot, but Uni right back Adam Redford managed to get a foot in to clear the danger.

Like the first half, University scored three minutes in, and the goal heralded a better, brisker half.

A Terriers defender managed to get a touch on a cross from the right by Jacob Cairns but it wasn’t enough to knock it out of the path of Butler who was able to guide it home at the near post.  Just over 10 minutes later, Cairns had his own shot, this time forcing Hodgson into a diving save.  In between, Terriers No. 9 Sado Djalo couldn’t get enough power into a header on a cross from the right by right back Keelan Nellis and the ball slid wide.

Djalo and Stephenson then combined for several attacks but were unable to test Claxton in the University goal.

In the 66th minute Terriers got themselves within touching distance, with Sado Djalo stroking a first-time shot into the University goal, but they couldn’t capitalise on the strike.

After skying one shot well over the bar, in the 76th minute Uni sub Keith Douglas latched on to a cut back pass by Romano and he found the gap between Hodgson diving to his left and the inside of the post to round off the scoring and secure the win. 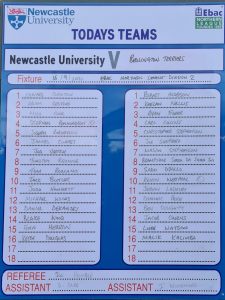