It’s been a summer of major change at Pickering Town: Relegated and playing in a new league, with some expecting them to be playing in the Northern Counties East League.

But they’re now prepped and ready to go, after having to re-adjust to life a step down the football pyramid.

“It’s a totally fresh start for us.  We were obviously very disappointed to be relegated, it was the last thing we wanted, as we wanted to push on, but we are where we are.

“We’ve just got to dust ourselves down.  We’re a relatively small town, with a population of 9,000 and our pulling power for players has mainly been Scarborough, York and Hull.  But now that we have moved into the Northern League we are finding it hard to attract players to travel that far.  We don’t have masses of money and tempt people with hundreds of pounds.

“This year we will be looking to secure our place in the first division.  We don’t expect to win the league just because we have come down.  Realistically a top half finish would be very good, but if after Christmas we’e in a position to push for promotion then we’d be happy to go for it.

“As far as the squad is concerned we’re getting stronger and we have new faces joining us.”

Their first test is away to Bishop Auckland and they’ll be playing against completely new opponents.

“We have played a couple of sides in the Vase and FA Cup but we’ll give is our best shot and everyone will get a warm welcome when they visit us.

“It’s exciting but a bit apprehensive too.  Half of our fans would have preferred to go into the Northern Counties East, just because of the travelling, but it’ll mean us going to a lot of new grounds and it’s nice to have something different, but it’s going to be hard.”

Manager Steve Roberts added:  “It’s been quite a transition for the club, losing some players and getting new players in.  It’s been the busiest pre-season I’ve known – it’s been non-stop.

“Three weeks ago I was concerned.  We needed to bring in 5-6 players, but now that we’ve got them we have got a better, stronger core, although the group still needs adding to.  We’re a lot closer to where we want to be.

“We’ve brought in Paul Roddam, Jamie Poole and Jack Norton who all know the league which will help us.  Sometimes a fresh, new challenge is exciting and I’m looking forward to it.

“We’ve always had a warm welcome when we’ve played Northern League teams in the past and some of the facilities are fantastic, there are a lot of nice grounds.  We’re aiming to get established in the league, get a good start and see where that takes us.” 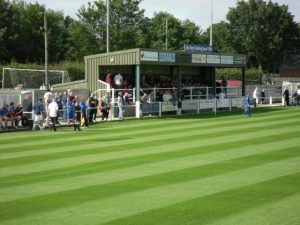