Heaton Stan promoted to Division One

Carlisle City were presented with the Division Two trophy in a special ceremony at Gillford Park following their title success – on goal difference.

As well as the Division Two championship trophy, the club also had the Cumberland FA Senior Cup on display for friends, family and supporters.

After the ceremony, manager Jim Nichols said:  “I am immensely proud of the players.  I don’t think outside of this football club there was any expectation on us at all.

“Other teams have budgets far in excess of what we can managed, but what we have is a group of really committed, local players who want to play for this football club.

“They have given everything for the cause.

“In February we were 11th in the division with 7/8 games in hand and we were a long way off but I always thought we could string a run of games together.

“On the last day of the season the players managed the situation really well.  We were a bit nervous but once we got ahead we put on a really professional performance and deserved the three points.

He cited three matches – Newcastle University and Tow Law away and a 2-1 win over Durham as crucial.  “Winning at Durham with almost the last kick of the game was a great moment.”

And chairman Brian Hall added:  “It’s been absolutely tremendous – unequallyed in our history – we are absolutely ecstatic.

“The highlight of the season, strangely, was the second, winning goal in the 92nd minute in the game against Durham City.  We were making hard work of it.  If we had not scored we were out of contention; we then realised we could possibly win the league.

“There is a close bond between the players and that has brought us through.”

And congratulations to Heaton Stannington on gaining promotion to Division One after a come-from-behind win against Tow Law Town, with a 94th minute winner in front of a record crowd of 1,091. 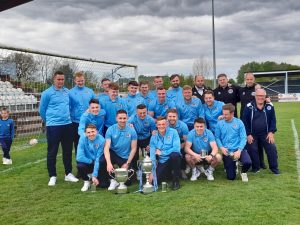