WEMBLEY-BOUND HEBBURN HAVE BEEN TRANSFORMED

In the second of our previews for Monday’s Buildbase FA Vase final between Consett and Hebburn Town, we focus on the South Tynesiders, featuring interviews with chairman Vin Pearson, manager Kevin Bolam and captain Louis Storey.

Almost three years ago, in my review of the 2017-18 season for the league blog, I wrote:  “Teams to watch next season: Division One: Newly-promoted Hebburn Town have had a major overhaul off the field and their average attendances this season was the 12th best across both divisions. You get the impression they’re a club ready to kick on and grab the challenge of promotion with both hands, just over a year after there were serious doubts about the future of the club.”

To reach the Vase final is just one sign of their progress over the last couple of years.  Without a doubt, they would have been promoted out of the league sooner, had it not been for the pandemic.

They won’t be able to claim the first division trophy as they move up to the new Step 4 league for the region, they’ll be doing all they can to win some silverware before they move on to pastures new.

Chairman Vin Pearson said:  “I came here 30-odd years ago when they were in the Wearside League and took them into the Northern League.  I’ve been assistant manager, manager and general manager, so this is my football home and I live nearby.

“There has been tremendous support in the town.  I can’t walk around without people wanting to talk about the club and the Vase.

“Away from the playing side, Stephen Rutherford, Dave Patterson and the rest of the backroom staff have done a fantastic job leading up to the final.”

Manager Kevin Bolam said:  “This will be the biggest game I’ve ever been involved in.  I’m led to believe it is the biggest game in the club’s history.  We’re proud to get to the final and represent this great club. Since I took the job on we’ve put on fantastic displays in the Vase.

“The day would have obviously been better if there were fans in. There should be a cracking atmosphere in the houses across the North East that are tuning in. Hopefully, the game should be a great advert for non-league football and for the North East.”

And Hornets captain Louis Storey added:  “We’ve got to enjoy the occasion because days like these don’t come around often.”  He cited the spirit  shown in their semi-final win while looking ahead to the game.  On the back of a long away journey to Kent, Hebburn found themselves a goal down and a man down following Olly Martin’s red card.  A late Graeme Armstrong equaliser sent the game to extra-time and the Hornets went through on penalties after another goal apiece in the extra period.  Storey said: “It seems like a lifetime ago we qualified from the semi-finals with that incredible result where I witnessed my teammates sacrifice everything they had to offer physically and mentally. The thought of leading this group of players and representing everyone connected with Hebburn Town FC is truly humbling. It is a responsibility I am relishing.”

Key statistics: Four of Hebburn’s six FA Vase ties in the 2019/20 competition were played away from home.  1,584 miles of travel on Vase away days measured from the Green Energy Sports Ground to opponents’ stadiums. 548 days between the club’s first game in the competition and final on Monday 3rd May. 14 goals scored by Hebburn town in the competition, an average of 2.3 goals per game

Hebburn Town road to the final:

Photos:  Michael Richardson scores the winner in last week’s Vase win, manager Kevin Bolam and the word on the street (on the pavement outside the ground): 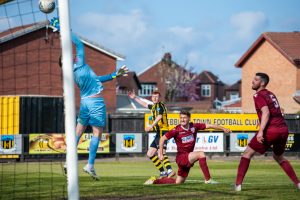 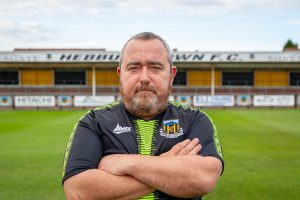 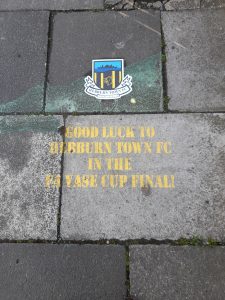