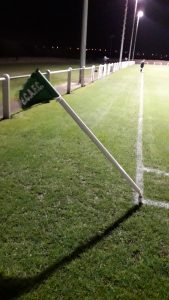 Not that you’re probably interested, but the challenge posed by last night’s game was how to get going when it comes to describing it.

It wasn’t a bad game, it just never really sparked into life.  It lacked character (apart from the usual work rate you expect from teams).

Heaton Stannington played with a little more style than Easington; they started well and finished the game strongly.  For their part, Easington will simply point to their two goals and three points in the bag.  Not every win can be accomplished with elan.

Most of the pressure in the opening 15 minutes came from Heaton Stannington, but they couldn’t convert their superiority into a goal. It took Easington a good 20 minutes before they got into the match as an attacking force.

Any thoughts that we could be heading for a 0-0 were dispelled two minutes into the second half.

With seemingly little on, Josh Home-Jackson swung a foot and swung the ball over Heaton Stan keeper Daniel Regan who managed to get a hand to it but couldn’t keep it out.

The No. 10 got his and his team’s second in the 73rd minute when he got ahead of a couple of defenders to reach a cross from the left first and swept it in.

The introduction of Joe Kerridge for the visitors gave them more of a threat up front. But it was No 9 Connor Campbell who contributed the “too little too late” goal in the 95th minute of the match.

The final whistle was the cue for the spectators to head for the exit in pretty sharpish fashion to get back to their cars and out of the biting cold.

The Met Office would have had more than a couple of words to describe conditions:  Blowy, breezy, blustery, brisk, unsettled, fresh, blowy, drafty, raw.  The corner flag wasn’t the only thing that took a bit of a pasting.

Conditions certainly didn’t help the cause of good football.

And thanks to Ashington secretary and fellow League Management Committee member Gav Perry for the best blog photo of the season so far, with a panoramic shot of Welfare Park.