A GAME TOO FAR

It was with some trepidation that I travelled to Warrington – along with both hope and expectation, with Hebburn fresh from their great FA Vase win on Monday.

Trepidation as I’d seen Rylands beat Shildon and West Auckland in the previous two rounds, both in penalty shoot-outs (having previously dumped Jarrow out of the cup, also in a shoot-out).

But the Cheshire made it four Northern League scalps out of four to progress to the semi-finals, where, no doubt, they’ll deservedly be installed as favourites to lift the trophy.

Hebburn couldn’t quite scale the heights of their Wembley heroics and by the end of the game they looked as though the rigours of the weekend were starting to take their toll.  They battled all the way and on another day could have grabbed a win, but on their second half performance Rylands deserved to progress, looking quicker and sharper in the second 45-minute spell.

Both teams started the game well, on the front foot and looking to attack.  In the 21st minute Graeme Armstrong (who put in a shift and a half up front), met a Michael Richardson corner with a header that a Rylands defender could only block a couple of feet from the goal line, but Armstrong couldn’t quite reach the loose ball for a second chance.  His opposite number – Elliot Nevitt – had Rylands’ best chance of the half when he was put through only to take the ball wide with a poor first touch.

In previous rounds, Rylands keeper Graeme McCall had been the standout player and only two minutes into the second half he produced a match-winning save to deny an Amar Purewal shot after the ball was flicked on to him by Armstrong.

Then Rylands started to gain the ascendancy, particularly in midfield, forcing Hebburn on the back foot.  On the hour mark they got the breakthrough that they’d been threatening with a period of sustained pressure.

Right back Warren Gerrard worked the ball into the Hebburn box where Nevitt was able to turn and hit the ball low into the right hand side of the goal, just out of the reach of keeper Mark Foden.

They almost doubled their lead in the second minute of added on time.  No. 10 Ste Milne had a shot deflected by Darren Lough, with the ball rebounding off the bar and landing just in front of the goal line.  Minutes later it was all over for the men from South Tyneside.

Despite the defeat, it’s been an incredible (truncated) season for the Hornets – promotion out of the league and that Vase trophy.  They leave the Northern League for pastures new, with this as their swansong.  They gave it their best shot, but it wasn’t quite good enough on the day. 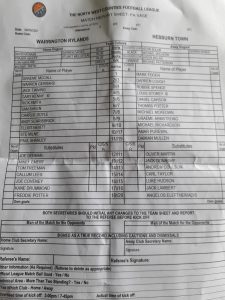