WEST GET THE HANG OF THIS TROPHY BUSINESS

Two years ago – the last time we enjoyed a full, completed season – West Auckland lifted the Mitre Brooks Mileson League Cup.  Last night they were at it again.

In the end, the two-goal margin of victory – against a plucky, resilient Synners team who pushed West all the way – was about right.  And it meant they added the Durham Challenge Cup to their silverware.

It wasn’t a classic game but it was certainly competitive, even though both teams had not played many meaningful matches over the last couple of months.

There were a couple of early chances for both teams.  Synners No. 11 Curtis Howes making space to fire in a shot, punched away by West keeper Decklan Greenwood and then a mad scramble by the Synners defence to keep shots by Liam Hegarty and Kyle Fryatt out.

The match was played at a pretty frantic rather than measured pace, with no-one able to put their foot on the ball and calm the play down.  A series of niggling fouls didn’t help matters.

For Synners, Joshua Rowbotham put a header just over the bar while West’s best openings came from corners, including a a Gary Brown header which flashed off a defender and over the goal.  The best chance came the way of Synners No. 7 Joe Ferguson who hit a fine free kick that looked to be creeping inside the left hand post until Greenwood pushed it wide.

There was controversy in the 59th minute when Fryatt looked as though he was pulled back by Foster Garton as he broke through into the Synners box but the referee waved play on.  It was a reprieve, but it only lasted 11 minutes.

West took the lead and fittingly it came after the most incisive attack of the game.  West captain Anthony Bell stroked the pass of the game up to David Dowson who was able to break clear of the defence.  His shot produced a top quality save by Daniel Dixon who ran out to close down the angles, only for the ball to fall back to Bell.  He drove at goal and his shot took a big deflection off Synners No. 4 Rowbotham, looping into the net.

Synners almost grabbed an equaliser in the 72nd minute when they had a header cleared off the line by West full back Andre Bennett.  But the win was sealed in the 92nd minute when Fryatt took the ball across the Synners defence and then put his shot back across the goal, finding the net just inside the left hand post.

There may be all kinds of astericks to mark the win, given the circumstances of this year’s competition (with clubs able to pull out because of the pandemic) but the victory seemed to taste just as sweet for West players, management team, committee and fans.

A small,insignificant thing, but it was a pleasant duty to include an attendance figure when updating the result on the website.  Plenty of people were obviously just delighted to be able to be back at a game.

And it was great to see so many of the usual suspects at Billingham Town, who hosted the match: groundhoppers as well as supporters from teams not playing in the match.

And, finally, many thanks to John Topping and the rest of the Durham FA staff for organising the final.  It has been a challenging year for everyone involved in football. 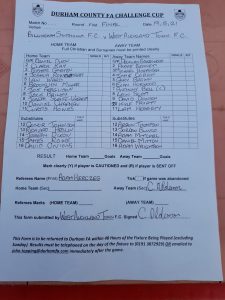 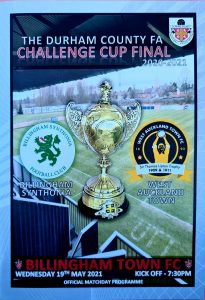 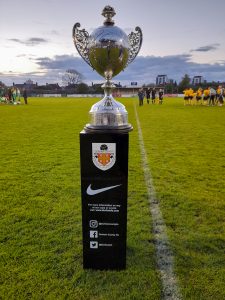