EASINGTON GET OVER THE LINE

Easington Colliery managed to pick up all three points against Redcar Town, despite the visitors having several second half chances.

The opening half hour didn’t offer much – both teams looked sluggish as they struggled to sustain attacks and create any real chances.

Easington took the lead 33 minutes in – a deflected effort from the edge of the area fell into the path of Brad Forster, who then rounded Redcar keeper Mike Algie before slotting home.

The home side doubled their lead four minutes before half time, when Dennis Tapping was through on goal before lifting the ball over Algie.

Redcar picked up the pace in the second half, pushing forward in numbers in a bid to get into the game.

With 54 minutes on the clock, Carl Williams spurned a great opportunity to pull a goal back for his side. Joe Dixon’s cross found Williams at the back post, who turned the ball over the bar from six yards out.

Redcar had another great chance just five minutes later – Kurtis Howes’ low cross found the unmarked Brad Moncur, before his strike was turned over by the Easington stopper.

Williams redeemed himself from his early miss with 15 minutes remaining – the forward brought down the ball in the area before smashing home to halve the deficit.

The away side almost drew level in the third minute of added time. Nico Weatherald’s vicious effort forced a fantastic save from the Easington stopper as he turned the ball around the post.

Howes was dismissed seconds before the full-time whistle which left many fans and myself confused at the reason why.

Easington held on for all three points to remain 12th in Division Two, whilst Redcar Town drop to eighth. 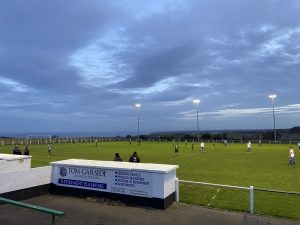 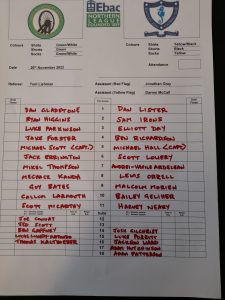 Out of not very much, West Allotment found something special to impose a stunning victory over near neighbours Whitley Bay.

The first half wasn’t much to write home about, not helped by a blustery wind that made long balls in particular, unpredictable.  Whitley Bay played the better football, with Elliott Day down the left involved in many of their attacks.

But it was West Allotment who scored a goal and had another two chalked off.  As Allotment attacked in the 15th minute referee Tom Lishman played a great advantage after a home player was fouled; that allowed Scott McCarthy to get the ball, take it across the defence and prod it past Bay keeper Dan Lister, with the ball just about making it over the line.  Ten minutes later Allotment bundled the ball over the line from a corner only for the referee to cancel it for a foul in the goal mouth.  In the 38th minute, Allotment No. 9 Guy Bates was able to slide the ball under Lister but was flagged offside.

Bay’s best chance came in the 26th minute – Lewis Orrell with a shot tipped over the bar by Allotment keeper Dan Gladstone.  They should have been level in the first minute of the second half.  Day sent over a cross that Andrei Vasile Ardelean somehow managed to spoon over the bar with a first time shot from a couple of feet away from the goal.

The floodgates were about to open.

Three minutes after the re-start, Allotment were awarded a disputed penalty when Callum Larmouth went down after a challenge by Lister.  Larmouth hit the spot kick high down the middle to make it 2-0.  Within seconds the home team were 3-0 up, Larmouth sending over a corner that Thomas Kalthoeber met with a neat header inside the right hand post, giving the sub a debut goal.

Things went from bad to worse for the Bay defence as they were still reeling from two quick goals to concede a fourth in the 53rd minute.  Larmouth hit a shot that rebounded off the post and fell nicely for McCarthy who drove the ball in for his second.

Whitley Bay players and fans were stunned in the 55th minute when the hosts made it 5-0 with the goal of the game – Mikel Thompson with a flying, diving, bullet, unstoppable header as he latched on to a corner delivered from the other side of the box.

Whitley Bay mounted the semblance of a comeback just before the hour mark when winger Harvey Neary got behind the Allotment defence before chipping in a cross that Malcolm Morien met with a goal-bound header.  5-1.  In the 70th minute, Whitley Bay sub Adam Hutchinson hit a shot from outside the area that somehow managed to get through a gaggle of players before being cleared off the line by the Allotment defence.

West Allotment piled on the misery with just over a quarter of an hour to go, making it 6-1.  Larmouth hit a piledriver off the post, with the ball falling kindly to Joe Conway who was able to apply the finishing touch.  They should have made it seven in added time – Conway spurning a great chance by sending a shot over the bar with only a defender desperatley tracking back after the No. 12 had been sent clear by Bates.

A pretty mundane first half turned into an astonishing Allotment onslaught.  A game of two halves doesn’t do it justice. 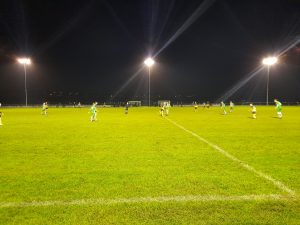 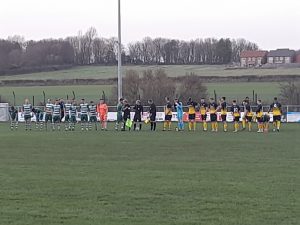 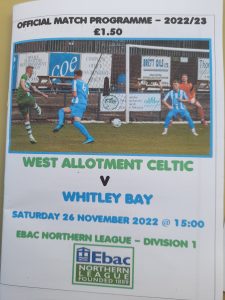 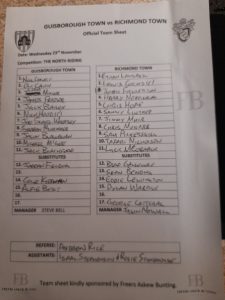 In the end Guisborough’s better quality and fitness proved too much for their Wearside League opponents.

But for the first half especially, Richmond gave a good account of themselves, with a confident, busy start.  Luke McCormack had their first shot, quickly followed by a better effort by Sanny Lingthep that Guisborough keeper Will Cowey had tip away for a corner.

Richmond keeper Ethan Lansdell had to be equally sharp – stopping a Michael McGee shot at full stretch.  It was a taste of things to come from the Guisborough No. 10.  The home team started to create more chances around the half-hour mark – Jason Blackburn being closed down by keeper and defender as he tried to get through on goal, James Frazer putting a header wide and Jack Blackford hitting a shot high.

Guisborough finally took the lead in teh 40th minute.  An excellent run down the right by Oli Cann was finished off when the No. 2 delivered the perfect cross for McGee to meet and plant a powerful header into the net.  Four minutes after the re-start McGee had another chance – trying to chip the ball round Lansdell who did well to get a touch on it to send it out for a corner.

From then on in, the game belonged to Guisborough, as Richmond started to flag.

In the 70th minute McGee was bundled over in the box and sub Cole Kiernan converted the spot kick.  In the 76th minute the No. 10 provided a cool finish after being set up with a pass by Cann to make it 3-0.  Three minutes after that, Kiernan prised open the defence before passing to McGee who had the relatively simple task of chipping it over the keeper to complete his hat-trick.

Guisborough wrapped up their scoring in the first minute of added time – Liam Miller swinging a foot at a ball from the left that eluded defenders and keeper.

But there was still time for a Richmond goal – substitute Eddie Lewington intercepting a back pass before rounding Cowey and slotting the ball into the net to make it 5-1.

Last year’s finalists make comfortable progress to the next round. 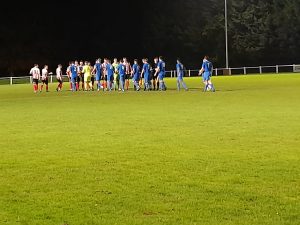 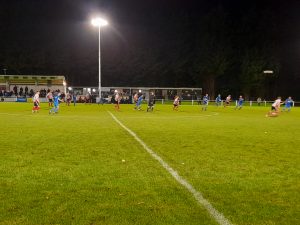 A number of fixtures have been moved due to FA Vase ties and postponements. 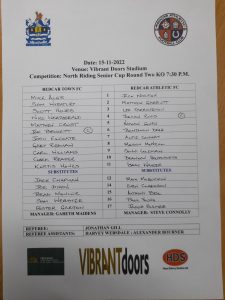 A historic match turned into a dramatic cup tie thanks to late, late drama, with the spoils eventually going to Town.

It was the first time the two teams had played each other in a competitive match and I suspect the bumper crowd of more than 600 people will be talking about the game for quite some time.

The action started early, with Town taking the lead in the 11th minute after getting off to the better start.  A corner found Kurtis Howes at the far post, the No. 11 skipped past one defender before placing the ball past another defender and the keeper.

Minutes later, Howes hit a first-time half volley over the bar with clear sight of goal.  He was then within a whisker of connecting with another corner as he made a run into the six yard box as both he and Town made the early running.

Athletic started to find their feet in the last 20 minutes of the half but they were unable to capitalise despite most of the play in Town’s half.  Their best chance fell to Brandon Holdsworth who connected with a Mason McNeill cross but curled his first time shot wide.

The visitors picked up where they left off at the end of the first half and drew level six minutes after the re-start.  A corner sailed over to the far post where Ben Dale was on hand to nod it over the line.

McNeill and Town No. 9 Carl Williams then traded shots that were deflected for corners, but overall Athletic were on top, with Town unable to repeat the quality of their passes and moves of the first half.  It wasn’t one-way traffic but the visitors certainly had the upper hand.  Town started to string a couple of attacks together  in the last 15 minutes.

Dale put in a well-timed tackle just as Town sub Jack Chapman was lining up a shot and then Williams hit an acrobatic overhead shot that was blocked by a defender, but it looked as though we were heading for a penalty shoot-out.  Town had other ideas.

In the 90th minute Athletic keeper Jack Norton pulled off two great back-to-back saves but Town sub Joe Dixon picked up the loose ball from the second to thread a shot into the net.  Surely the goal had sealed a Town win?

Athletic had their own ideas too.  Town full back Sam Wheatley caught Isaac Walker as he tried to clear the ball from the home area and referee Jonathan Gill pointed to the spot.  Walker coolly tucked the spot kick away.  Right, surely that’ll be it before the penalty shoot-out?  Not a bit of it.

In the dying seconds, Town launched a lightning quick counter attack, with three attackers up against one defender.  Williams squared the ball to Howes only for Norton to pull off another outstanding save to keep his side in the cup tie which eventually went to the shoot-out.

Norton was saint turned sinner when he took Athletic’s second spot kick only to chip the ball on to the bar.  Team mate Matthew Garbutt had his penalty saved by Town keeper Mike Algie and Town penalties by Nico Weatherald, Williams, Josh Elcoate and Dixon sealed the famous victory, despite Joe Bennett chipping his spot kick over.

An historic match had turned into a memorable one.

PS – after the loss, Athletic announced that they had “parted company” with manager Steve Connolly.

PPS – it was the only game involving our teams in county cup matches to survive the weather – with huge credit going to the ground staff at the Vibrant Doors Stadium.  The pitch looked perfect. 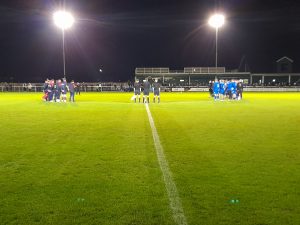 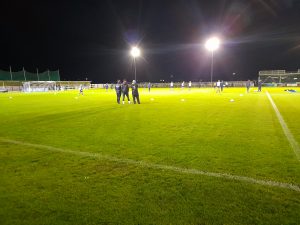 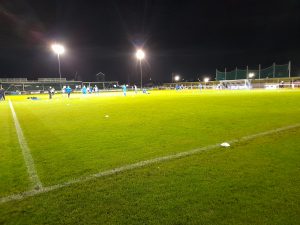 Horden CW will play AFC Darwen at home in the third round of the Isuzu FA Vase.

Horden is the only Ebac Northern League team in the draw.