ALL SQUARE IN SIX GOAL THRILLER 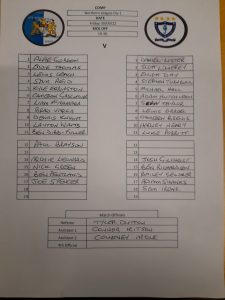 In a game of thrills and spills, it would have been a bit of a travesty for either team to lose this thoroughly entertaining encounter.

Benfield’s biggest crowd of the season were certainly given their money’s worth.

Both teams are improved on last season – Whitley Bay significantly so – and the quality of their play was plain to see, especially in the opening quarter of the match, with chances from the off.

Both No. 9s – Cameron Brewis and Dennis Knight had shots deflected for corners within five minutes; and with eight minutes on the clock Benfield took an early lead, with a shot only partially cleared by Bay defender Michael Hall.  The ball fell kindly to Layton Watts who struck it low, hard and into the net.

The chances kept on coming, with Bay No. 3 Elliott Day with a touch and shot stopped.  Minutes later the visitors were level – a great cross by Scott Lowery into the heart of the Benfield goalmouth found Sean Taylor who found the finish to make it 1-1.  At the other end, defensive work by Taylor was able to stop Ben Dibb-Fuller from shooting after the No. 11 worked a good one-two with Watts.

Half an hour into the game and it was Bay with more possession and pressure, with Benfield looking dangerous on the quick break, but it was from a set piece that the next best opening came.  Lowery got on the end of a long ball from the left and his header was stopped by Alfie Gordon with an instinctive save.

In the last couple of minutes of the half there looked to be a pivotal change of fortunes for the teams. Whitley Bay were awarded a contested penalty when Luke Porritt was brought down in the area.  Harvey Neary stepped up to take the spot kick that was saved by Gordon diving down to his right.

Benfield were then able to cash in on a huge piece of good fortune – a shot by Knight taking a deflection off Stephen Turnbull that completely wrong-footed Whitley Bay keeper Dan Lister who could only watch as the ball hit the back of the net.

Things got even better for Benfield in the 50th minute – winning a penalty after Lowery brought down Watts, with Knight converting the spot kick.  3-1 down, it took the visitors almost 10 minutes  before they found their rhythm again, but once they did, they were rewarded with a goal to get them back in the game.  Neary hit a short pass to Brewis who, after a touch, buried the ball past Gordon.

Both teams kept pushing forward:  Watts forcing a fingertip save from Lister and a three man pass involving Adam Hutchinson, Brewis and Lowery, with the No. 2’s shot stopped.

The visitors were able to draw level in the 74th minute after Gordon spilled a corner into the path of Day who struck the ball through a crowded six-yard area to level it at 3-3.  Each side had a decent chance to secure all three points – Adam Shanks poking the ball wide after good work down the left by Josh Gilchrist and Day, followed by Benfield sub Archie Leonard hitting a half-volley off a defender, unable to find the gap to score.

But a draw was right.  Whitley Bay are top, while Benfield are nestled in fifth.

PS – it was good to see the Benfield pitch looking in better nick than it has been for the last couple of seasons.  It certainly helps the quality of the football on offer. 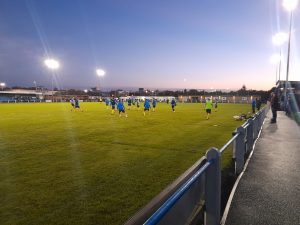 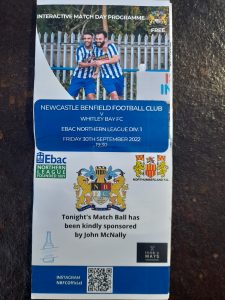