It was all very messy (and we’re not talking of Lionel here).

Moments of quality were few and far between in a match that at times was very tetchy, with plenty of yellow cards brandished by the referee who may not have had the best of games but he certainly wasn’t helped by the players – crowding round him on several occasions.

The match got off to a promising enough start:  West winger Corey Nicholson cutting in from the right, with his shot parried by Guisborough keeper Robert Dean and then hacked away by No. 2 Callum Martin.  West keeper Sam Guthrie then stopped a Louis Johnson shot with his legs.

A long ball up to Guisborough No. 10 Steven Roberts gave him a run at goal but he could only pull his shot wide left.  Nicholson then had his second shot after cutting in only for it to go over the bar.  He was West’s most dangerous threat in the match.

Guthrie then made two crucial saves – tipping a Joseph Hope cross over Guisborough skipper Joseph Bartliff just as he was running in at the far post.  He then followed that up within a couple of seconds with a point blank save to deny Johnson.

The game was ultimately decided in West’s favour in the 29th minute and the goal was down to Nicholson who chased a long kick out by Guthrie all the way to the byline, managing to keep the ball in play before hitting the ball into the box where Jordan Blinco met it at the near post and slid it past Dean.

It was the highlight of the game, with the flow regularly interrupted by fouls and bookings, with Bartliff sent off in the 56th minute for a second booking.  It took West another 15 minutes before they shifted the balance of play their way.

Guisborough’s best chance to level the score came in the 79th minute.  Brad Plant ran at the defence before passing it out to Roberts.  His cross to the far post was met by Ben Jackson but he couldn’t keep his header down.

West looked content to hold on to their one-goal lead by committing only a couple of players to their attacks.  The three points and the play of Nicholson were the best features of their afternoon’s work.

Not one for the football purist. 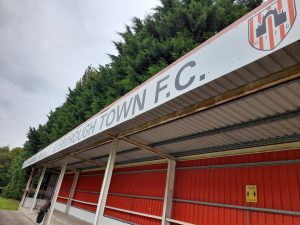 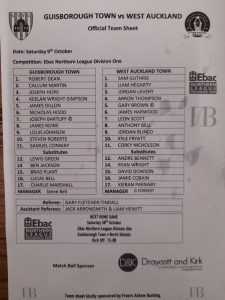