BETTER LATE THAN NEVER FOR BENFIELD

Newcastle Benfield left it late to take all three points in a scrappy affair at home to Crook Town.

Benfield got off to a great start 12 minutes in – a corner from the left was met by the unmarked Dennis Knight at the back post who headed beyond Charlie Lamb.

The remainder of the first half didn’t offer much – Alexander Walker headed over for the visitors whilst Paul Brayson saw his headed effort brilliantly tipped round the post by Lamb.

Neither side were able to create many clear cut chances, resulting in a scrappy contest. The second half was much of the same as both sides struggled to get a foothold of the ball.

With 20 minutes remaining Crook drew level. Steven Johnson picked out Craig Moody with a lofted ball over the top, before the striker lashed the ball past Alfie Gordon.

Benfield restored their advantage three minutes from time – Ben Dibb-Fuller’s low cross fell to the feet of Eddie Thomas, who was left unmarked in the area, before he placed the ball beyond Lamb.

Ten minutes of stoppage time was awarded – which resulted in a flurry of Benfield chances. With Crook pushing forward to nick a point, gaps began to appear which Benfield took full advantage of.

Substitutes Archie Leonard and Layton Watts came agonisingly close to sealing the win for Benfield – Leonard saw a low effort go wide before his low cross was turned over by Watts.

Benfield did seal the win just a minute later when Dibb-Fuller drove through the Crook defence. His initial effort was saved by Lamb but Dibb-Fuller was able to tap home the rebound to ensure all three points for his side. 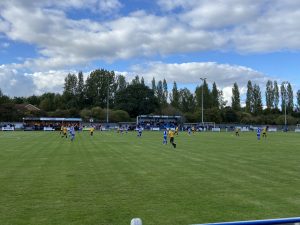