COLLIERS GIFT WIN ON A PLATE 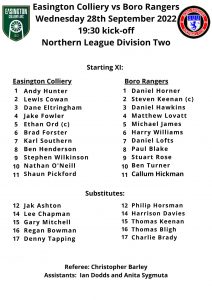 Easington Colliery were the authors of their own misfortune, generosity fully exploited by Boro Rangers.

To concede one goal with a sloppy backpass was bad enough, but to gift a second with another poor backpass was simply disastrous.

The two teams went into the break all square, with nothing much to choose between them in an open half which had a good pace to the game, a game that was turned on its head within a matter of minutes after the re-start.

In the 48th minute a loose ball fell outside the Easington area right in front of Boro Rangers’ Ben Turner who hit a beatifully struck half volley that dipped over Colliers keeper Andy Hunter and into the net.

And just over a minute later things went from bad to worse for the hosts, with the first of their mistakes – Rangers No. 9 Stuart Rose intercepting a back pass before knocking it past Hunter to double the visitors’ lead and giving them the perfect start to the second half.

After that, Easington had some chances to score, but the Boro defence held firm.  In the 56th minute, following a free kick from the right, Karl Southern and captain Ethan Ord had successive shots from inside a crowded area but Boro players were able to throw themselves at the ball to block the ball.

Southern followed that up with a curling shot from the edge of the Rangers box that was deflected for a corner.  They continued to spray the ball around without looking as though they were going to score for the rest of the game.

The nail was hammered into the coffin with only three minutes left and Rose was on hand again to make the most of the second poor backpass, rounding Hunter to wrap the game up at 0-3.  And in the last minute of the match he had a half chance to get a hat-trick, rising above everyone else at a corner but only able to head the ball into the ground and wide.

Despite the goals, the first half had the slightly better football:  Rangers keeper Daniel Horner beating Easington No. 9 Stephen Wilkinson to a 50-50 through ball; Rose taking a ball from the left before turning to shoot, with the ball taken down to his right by Hunter;  Easington immediately broke on the counter attack down the left – Wilkinson threading a well weighted ball to Nathan O’Neill who planted it wide before being judged to be offside.

Openings continued to be worked at both ends.  O’Neill setting up Wilkinson, with his shot punched away by Horner and then a Rangers free kick cleared off the line by Easington, followed up by an effort by Callum Hickman.

Southern had the best shot of the half, forcing Horner into a save at full stretch by Horner who was able to push it out for a corner. and then Colliers substitute Gary Mitchell within a whisker of getting on the end of a dangerous cross by O’Neill with only minutes to go before the break.

Easington were left to rue their missed opportunities.

Meanwhile, league new boys Boro Rangers sit proudly on top of the second division, with their fifth win on the bounce allowing them to leap frog over Billingham and Blyth Towns 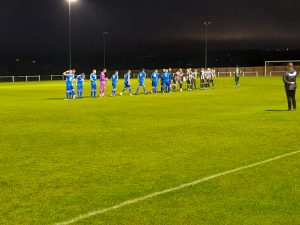