RCA had two gilt-edged chances that would have seen them home and dry as early as the 14th minute.  They were both missed and it cost them dearly.

The first came in the 11th minute when a beautifully weighted pass allowed Matty Weirs to get behind the Whitley Bay back line only for him to hit his shot straight at Bay keeper Isaac Libotte.

Three minutes later and a quick break from a Whitley Bay corner by winger Taylor Richardson set RCA away again.  Richardson’s pass set Callum Patton up.  The No. 7 tried to bend it round Libotte, only to hit it straight at the keeper.  They had let visitors off the hook.

RCA continued to hold the upper hand for the rest of the half, with Richardson in particular posing a positive, pacy threat, while for more than 20 minutes Whitley Bay couldn’t find the right ball up to their front players.

Meanwhile their No. 6 Luke Taylor was the main stumbling block for RCA attacks, and he was denied a goal at the other end.  An initial cross was too high for Tom Smith but Taylor was presented with a follow-up chance. He hit the ball across the RCA goal, with keeper Keaton Marrs tipping it away for a corner.  On the stroke of half time, Bay’s Josh Gilchrist had the last shot, hit from the right but taken by Marrs.

The teams then reversed roles.  Whitley Bay started the second half pressing RCA back and looking much more positive than they had in the first half and they were rewarded with a bit of good fortune in the 49th minute.  Mitchell Ramsay  sent in a low, hard cross from the left that deflected off RCA skipper Daniel Hawkins into the net.

For their part, RCA looked the more disjointed side and could only create half chances for Simon Jakab and Patton.  They had Marrs to thank for not falling further behind, with the keeper producing an excellent, instinctive save of a close range shot by Mitchell Ramsay.

They pulled level with only six minutes left of the tie.  No. 9 Michael Annang-Colquhoun pulled the ball back from the byline to Craig Hennis who managed to slide in and knock it in to send the game into a penalty shoot-out.

A perfect five out of five saw Whitley Bay into the third round, with Ben Richardson, Ramsay, Gavin Dick, Jake Jensen and Kevin Mirzakhanian all converting their spot kicks, with Libotte producing the decisive save, despite Weirs, Richardson and Christopher Winn scoring. 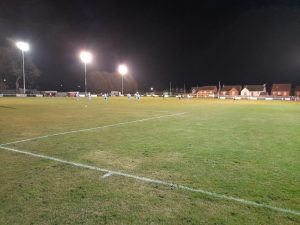 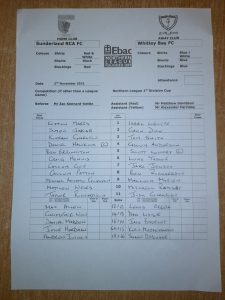 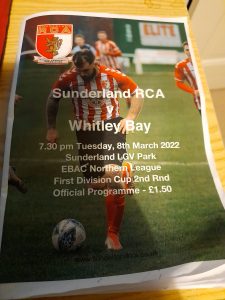