THE BONNY BLUES BANISH THE BLUES

It’s been a bit of a struggle in the league so far this season for the Bonny Blues, but last night they banished the blues, with a spirited performance to gain three valuable points.

They were up for it from the off; for the opening 15 minutes taking the game to RCA, playing some neat attacking football.  They could easily have been awarded a penalty in the 9th minute when left winger Jamie Armstrong was “nudged” as he tried to take the ball past a defender in the box.

They took a deserved lead when the ball fell to No. 9 Max Brown.  Given plenty of time and space more than 20 yards from goal, he looked up and curled an unstoppable and perfectly hit shot into the top right corner.  Brown was denied a second only a couple of minutes later when RCA No. 4 Simon Jakab stuck a foot in to knock the ball away just as the No. 9 was about to shoot from inside the box.

But they couldn’t maintain the quality of their play and gradually RCA got going, with chances for Michael Coghlan and Taylor Richardson thwarted by Penrith centre backs Matthew Moynan and Grant Davidson.  RCA’s biggest threat came down the left through Layton Watts.

As the game progressed, both teams were guilty of losing possession cheaply, with a scrappy end to the half.

Like the first half, Penrith started the better of the two and within five minutes of the re-start they doubled their lead when Jakab brought down Penrith’s No. 3 Matthew Coombe in the box, with Kingsley Grandison converting the spot kick.  Unlike the first half, they were able to maintain the quality of their play for much of the second half.

RCA keeper Jonathan Ball made a top save to stop a powerful shot by Penrith No. 8 Matthew Story at close quarters in the 54th minute.

Within seconds RCA got back into the match with one of the goals of the season so far.  The ball dropped to No. 7 Craig Hennis 30 yards from the Penrith goal.  There didn’t seem to be any imminent danger, only for the RCA midfielder to hit a screamer into the net.

The goal heralded the best phase of the match.  Ball pulled off another good save for a thumping shot by Armstrong, while at the other end, Penrith keeper Aaran Taylor was able to dive down to his right to push the ball out for a corner as Coghlan tried to place a header into the net.

A crucial error by RCA gifted Penrith their third goal.  A misplaced pass by Hennis went straight to Armstrong whose placed his shot just inside the left hand post to make it 3-1 in the 63rd minute.  The sides then traded half chances:  Grandison putting a shot wide right and a cross by RCA sub Thomas Hunter going just too far in front of Richardson, with a follow-up shot by skipper Daniel Hawkins sent over the bar.

With only a few minutes of normal time left, RCA made it a nervy finish for Penrith when Layton Watts knocked a short free kick to Coghlan.  As Penrith players stood rooted to the spot, they watched as the No. 8 blasted it in.  A second quality goal for the visitors but it came too late for them to salvage a point. 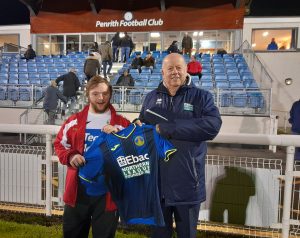 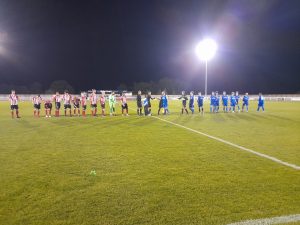 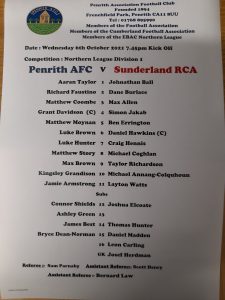